What You Should Know About Carnival Glass 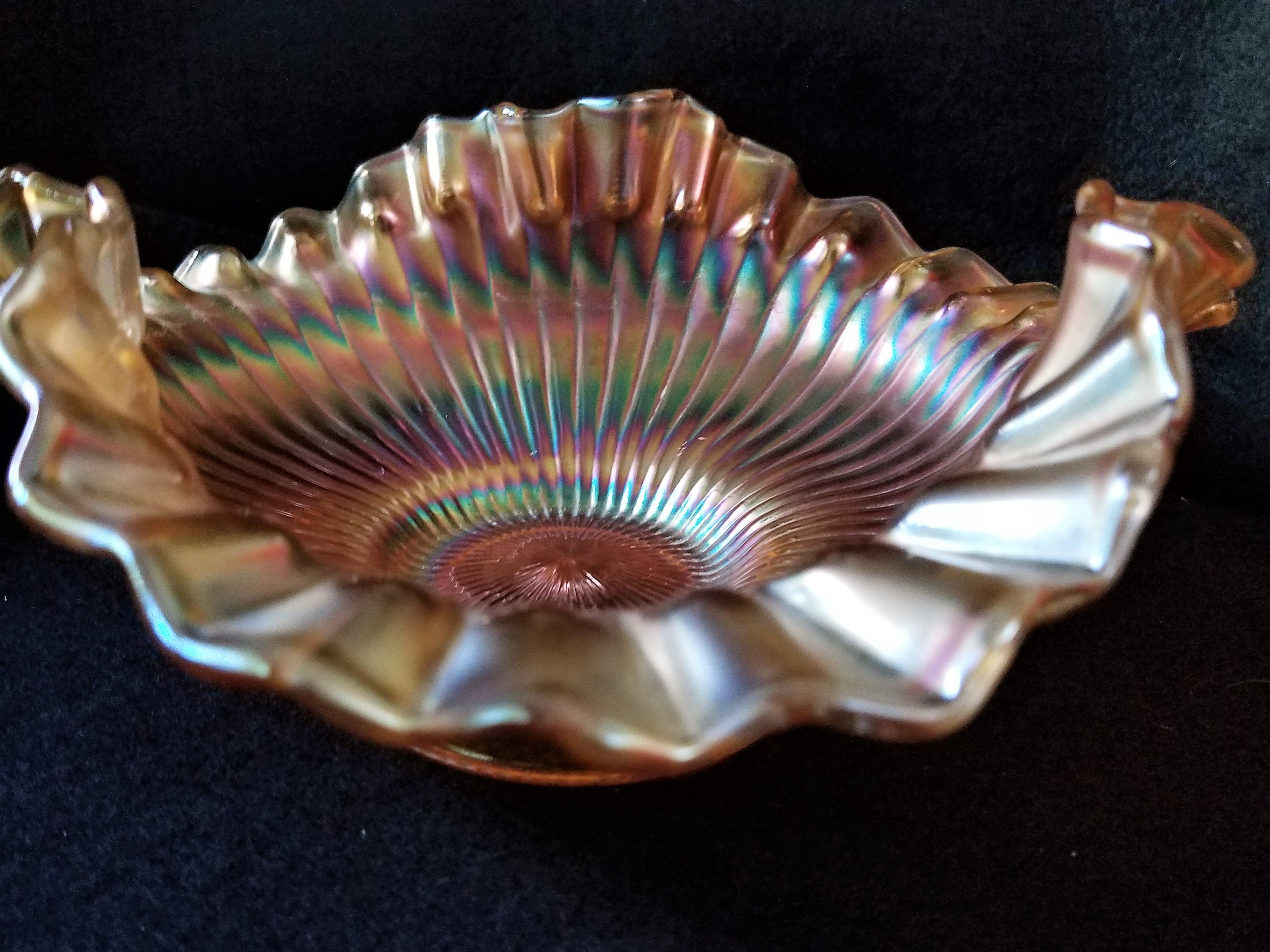 DISCLAIMER: READING THIS MAY CAUSE AN ADDICTION TO ESTATE SALES. READ AT YOUR OWN RISK!

1. Carnival glass was pressed glass that was mass produced using molds. It would come out of the mold, be sprayed with metallic salts, and then re-fired. The iridescence is on the surface, not inside the glass. Early pieces were then hand finished making ruffles, stretching them, making pitcher lips, handles etc.

2. It was made so that nearly anyone could afford it.  Called “The Poor Mans Tiffany”, millions of homes in America displayed and loved it during the turn of the century. And now, it does bring prices comparable to Tiffany Glass created around the same time.

3. It was sold in catalogues such as Sears, it was given away during product and store promotions and eventually sold to carnivals and circuses to give as prizes.

4. It wasn’t called carnival glass till 25 years after it started.

5. The most popular color (and cheapest to make) was Marigold. The rarest color is red. Red was expensive to make as it required red glass and was then sprayed with selenium and copper or gold.

6. Before it was known as Carnival, it was advertised as Taffeta glass, Rhodum, Aurora, Venetian, Pompeiin, Etruscan or simply Iridescent.

7. The most desirable and collectible Carnival Glass was made in the first quarter of the 20th century. Other years are also collectible but not as valuable or rare.

8. The Sailboat pattern is rare and thought to be a Fenton pattern.

9. Hat pin holders as well as toothpick holders are hard to find and very collectible.

10. The firms that made most of the Carnival was Fenton Art Glass(1907-2011), Northwood Glass, Imperial Glass and Millersburg Glass. Smaller producers were Cambridge, Heisey, Dugan Art Glass (1905-1906) and Crown Crystal from Australia in the 1920s.

11. Northwood was the only major producer of Carnival to mark the glass in the early 1900’s. They were the only company at the time who used a mark that they embossed on the glass but yet they didn’t mark all of it.

12. Imperial Glass is still in business. In the 60s, they started reproducing the nostalgic glass but also clearly marked them, unlike their early pieces. They also marked the word “Imperial” from 1916-1918. Today Imperial uses initials.

13. Millersburg Glass was founded by Frank Fenton’s brothers. They made a high quality product that has a distinctive clarity and brilliance that other companies didn’t have, so it is highly collectible. They were only in business from 1910-1914. 14. Amber is also a rare color used but Fenton and Imperial both made things in Amber.

15. Pastels are often overlooked as carnival glass, the most desirable is white which is clear glass with a frosty iridescence.

16. There are over 2,000 patterns of carnival glass. Nice relief was important so light would reflect in it.

17. All the manufacturers used some sort of grape motif. Northwoods used one called “Grape and Cable”. It was bunches of grapes hanging from vines and attached to rope like cables. Fenton had a “Heavy Grape” with dimpled grapes, Imperial had one called “Helios” and Millersburg had one called “Vintage” and one called “Malaga”.

18. There were no Carnival glass dinner or luncheon sets until well after the 30’s. There were beverage sets (pitchers with glasses) and table sets (butter dish, creamer, sugar bowl and spooner) and berry bowl sets but not sets of plates.

19. Most popular shapes were bowls, vases, and candy bowls.

21. There were very few plates early on. The makers liked people to see their designs and you couldn’t see them on plates.

22. Vases were super popular, they were made in molds but flared by hand. There were tall ones, short rose bowls, wall pockets, epergne (a delicate vase in the middle of a bowl to decorate the middle of a large table), automobile vases, and flower frogs (which were not iridized).

23. Companies used to have glass companies make them large orders to advertise and give to their customers. These are prime collectors pieces now and wonderful pieces of Americana. They were usually 6″ plates or larger bowls and most have raised lettering

24. Souvenir & Commemorative pieces are also sought after. These are pieces were for Elks, Masonic or Shriners, Centennials and popular vacation spots.

25. Carnival glass was also made into lamps, shades, sconces, candlesticks and more. Kerosene lamps were very popular. Most candlesticks were simple shapes with no patterns on them. The most collectible are the Boudoir lamps, a kerosene lamp in a caramel amber color with the Sunken Hollyhock pattern.

26. Buttons, beads and hatpins were also made from Carnival glass. The beads were popular from mid twenties to into the thirties and adorned bags, hats, comb cases and the like.

27. Carnival glass went out of style by 1930. There was carnival glass still being made, though Depression Glass, which was made for more practical tableware took over.

28. There was iridized Depression glass which is also called “late Carnival glass”. It had a different appearance because it was not as good quality and it was a flashed-on iridization that would wear off with use. Jeanette Glass made an iridized tableware pattern called “Louisa” in the 1950s. The color was called “Floragold”. Federal Glass made the same type from 1932-1938 in a pattern called “Bouquet and Lattice”.

29. In the 50’s glass banks were iridized and Fenton made Carnival glass animals.

30. How to tell a reproduction? No early Carnival had ice lips on the pitchers. (The part that keeps the ice in the pitcher besides the lip.) Reproductions are now marked by the maker. Watch for evidence of grinding or polishing the marks off.  Edges are no longer hand tooled.